The story of the New Orleans Evacuee

Its mid work week and there is a tropical depression in the Atlantic, the evacuee catches the news and moves on. It's only a depression, its pretty far away, nothing to worry about yet.

Three days later the depression is a storm, a hurricane and it is quickly crossing Florida or Cuba and heading into the gulf. The evacuee starts to watch, to hope that this thing goes somewhere else and becomes someone else's problem. They don't care where, just somewhere other than here.

The next day the projected cone comes out. The evacuee who was once in the clear in now in the cone and has to flee. They start calling hotels a few hours up the road, chances are there are no rooms in that town so they start calling in the next city up the road.

They never put down the phone. They call the Ramadas, the Howard Johnsons, the Best Westerns, the Hiltons, the Marriots, the Motel 6's and everywhere in between. When it comes to getting out of harms way, they don't care where they stay they just dial. The evacuee finally finds a reservation, six hours away. They reserve a room for themselves, one for their in-laws, one for their Aunts and Uncles, another for their neighbor and her mom and so on. The list is endless because in New Orleans, everyone is family and you never leave family behind.

They begin to gather things they can't live with out, important papers, insurance information, bottled water and things necessary in a crisis. They learn from Katrina that this is truly a crisis. A crisis knocking on their door. They mentally take inventory of what they have accumulated in life, what can they live without, what can they leave behind. They now know this is a real possibility, they know that there are some things they may leave behind and never see again. They know, because Katrina taught them that.

They go to work, they watch the news, they see the fear in the local news casters eyes. After all they have been through this before. They now know what can lie ahead, Katrina taught them that. They watch the weather channel, they see the excitement on the meteorologists' faces after all they aren't the ones leaving everything behind. To them it is a job, the next big one.

Two days before landfall, their city calls a mandatory evacuation, they lock their door and walk away. They have no choice, it's just things and they know staying is not an option. Last time it was mass chaos, like a scene from a third world country, they can't deal with that again they have no fight left. They get in their car to drive to their destination and the journey begins. The journey that takes there breath away and is so heavily laced with fear. The journey that may change their lives forever because they know that when and if this storm hits, things will never be the same. Their city is already in ruins, how can it survive another storm. But this is the gamble the evacuee takes by calling this city home. This city that is so unique and like no other in this country. This city that is their family.

They drive and they drive. What normally takes 2-3 hours has turned in to 12-14 hours or parked on some interstate and not moving at all. That is the journey for the evacuee. They finally land in their hotel and they laugh with their friends, their family, their neighbor. Its a laugh, but a worried humor. They talk about previous storms and previous evacuations. They eat, they laugh, they drink, but in the back of their mind they worry. What will happen? What will survive? Will it turn at the last minute? Will it destroy my home? They know these worries, these questions to ask themselves, Katrina taught them that.

It's 12 hours before landfall and they are glued to the weather channel. They watch as Jim Cantorie is standing outside of their hometown, because their hometown isn't safe enough. They watch the wind and the water and the rain and they wait. And wait. Because at this point that is all they can do. They know in a matter of hours that their life can be turned upside down and that things may never be the same. They know that they will once again "adopt" a new normal. They wonder and worry about their home, their job, their family, and their city. That is what they do, Katrina taught them how.

To all the family I left behind in my city, I am praying for you. I pray that Gustav spares you. My home and heart is open to you all. 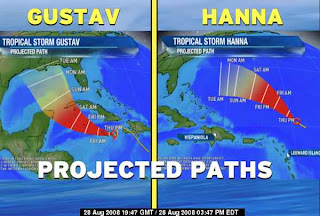 Email ThisBlogThis!Share to TwitterShare to FacebookShare to Pinterest
Labels: beyond our control

We are probably headed to B'ham on Saturday, but maybe on the way back home (because in positive thinking speak, Gustav is not Katrina and there WILL be a home to come back to this time!) we will stop by and say hi.

Kira I would love that, and yes youa are right, I am remaining positive for everyone, but wanted to give those who don't live on coastlines a view of what it is like to be an evacuee post katrina! If you need a place to say, just let me know!

thanks Mandi! the girls and I are heading out tomorrow to stay with my in-laws.

3 years ago today and we were the evacuee not knowing what was waiting for us, yet so very scared. Waiting, watching, and listening for only a glimpse of our former life. 10 different beds to sleep in, many in the homes of perfect strangers! Our family, pregnant, dogs and old taken care of by strangers, family,and God! Thank you God for the people and gifts you bring to us!! Our home is open to any and all in this time of need!!

B/w your post and your mom's comment, I'm sitting here crying. I can't imagine this is happening again. I'm just thankful my parents are heading out of dodge. I want to move back "home" so bad but this scare just reminds me of the reason why we are not in Houma.