The night before we left for Disney we stayed at the Hilton Airport. While the hotel was nice enough, with modest accommodations and pretty comfy pillows, Noah did not have sleep on the brain. We checked in about 7:30pm just in time to get some tikes ready for bed. Meredith curled up and went right to sleep, despite her excitement for Disney World. Noah on the other had thought he would hang with the big dogs and stay up late. At 10pm after trying to calm down a screaming Noah, Josh took him down to the car to ride around. He came back about thirty minutes later carrying a little passed out Noah man. Life was good.
Meredith all tuckered out! 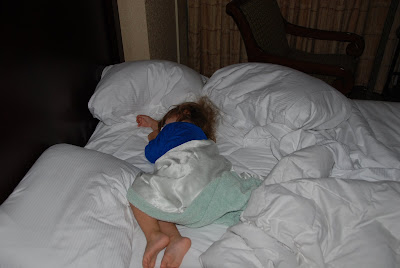 At midnight Noah woke up. It was a little unusual for a wake up at that time, but we were in a new place and he wasn't in his bed. Prior to this trip Noah was falling asleep in his own bed around 7:30 by himself. No rocking, nursing or soothing, we would just lay him down and he was out. Which is what the big problem was in the hotel, we couldn't just lay him down and leave. So at midnight when he awoke, I nursed him and held my breath while hoping he would drift right back to sleep. No such luck.

At 3:00am, Josh finally went back downstairs carrying a screaming baby to fetch the stroller from the loser cruiser. We decided this was best since he had been pulled over by security already for roaming the parking lot. I then cuddled back up with Meredith trying to soak in the hour and half of sleep we had left. We had to be up at 5am to catch our flight. At quarter to 4, Josh rolled in a tuckered out Noah into the room. I lifted my head up to tell him under no circumstances was he to move that child out of the umbrella stroller, and that my friends is where he slept. 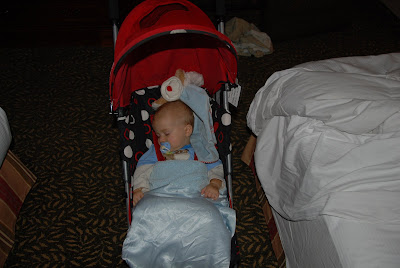 At 5am we all awoke and got dressed, well everyone except my little noah man. We rolled a sleeping Noah down to catch our shuttle. Although I was happy he was finally getting rest, I have to admit I considered giving him away only a few short hours before. Sleep.....Josh and I boarded the plane and were exhausted, but we would soon be in the land of magic and sleep was soon to be forgotten as well as schedules.
Rested up and ready to roll later on that day. 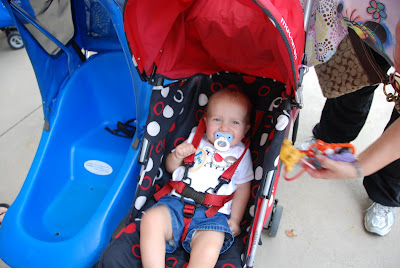 Now, Noah will not sleep now without screaming when he sees his bed. He has been rocked or strolled to sleep everynight for 7 nights, he has been sleeping in a miniature baby bed in a room with 4 other people for a week, why would he just go back to peacefully sleeping in his bed? I know it takes time to get back on schedule. Let's just hope it is sooner than later.
Posted by mandi at 1:04 PM