The cheerleaders and the hunk!

This past weekend we took the kids to the USM game.  It was Noah's first game, since his previous games were when he was in my belly!  It was also Meredith's "first" game, since she didn't remember ever going before.  It was also her first time to bring a friend somewhere, I have to say that is a pretty big girl move!

Here they are all dressed up in the USM garb, making funny faces!  Look at the happiness in those smiles.  To be young and innocent again! 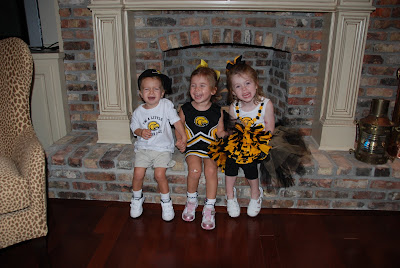 The girls trying to get Noah to sit by them....he was too cool for that! 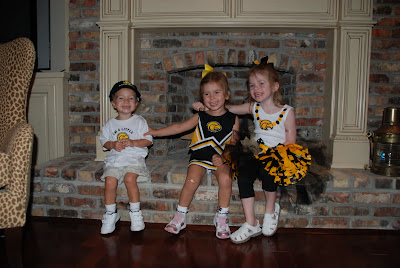 Gearing up to go!  Eagles to the TOP! 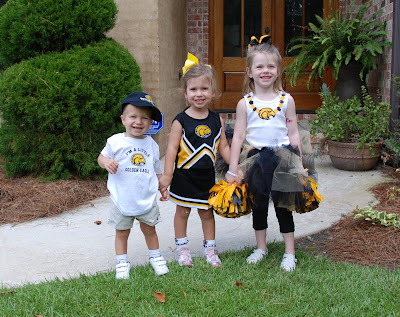 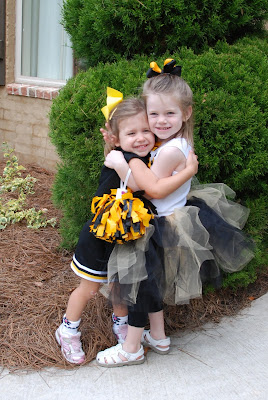 Pre-game we tailgated with the masses at USM.  We watched the bands, the cheerleaders and dance team and the kids were very interested in people watching.

The game was alot of fun.  We didn't have the typical game experience though, we watched it in a catered suite that Josh's office owns.  Talk about style.  The kids loved that.  They were right in the end zone with only glass between them and the field and several hundred feet of course, since we were on the third floor!

The girls played, cheered and had a ball.  Noah watched the game intensely, clapped, cheered, flirted with the girls both big and small.  Overall we all had a great time, it will be hard to go back to watching the games in the stands.  At one point during the night, Noah tried to crowd surf in the stands.  He had 5 adults up and out of their seats trying to catch him, someone did, I guess the boy knew what he was doing.  He also tried to climb over the glass railing the entire night.  Finally he took his shoes off and stacked them against the glass to get some height, he then climbed on his shoes and tried to boost himself over the edge....he came close.

At half time we headed out to get the three tikes home and in bed.  It was a great game.
Posted by mandi at 3:34 PM

Email ThisBlogThis!Share to TwitterShare to FacebookShare to Pinterest
Labels: all things Meredith, family fun, meredith and her pals, my little noah

Very cute pics! That is so funny that he stacked up his shoes to stand on them. You've got a pretty resourceful kids there! Glad the game was a good time and everyone had fun.

THose pics could NOT be any cuter.