What I like to dub the..."The I'm going to disney world and you're not!" snack day

Today was Meredith's first snack day of the year.  It also happens to be 3 days before we leave for our 2nd trip to Disney World.  I don't know who is more excited me or the tikes.  This year on snack day the kids also get to bring a small toy for show and tell.  The only show and tell brought that day is by the snack helper/line leader.  And to 3 year olds that is a VERY big deal.

Meredith was one of the last kids in the class to bring snack this month.  So we have been patiently waiting our turn to bring the snack and show and tell for what seems like an eternity.  This gave us plenty of time to think about what we were bringing.

Last week Meredith decided what she was bringing to show and tell all on her own.  She picked her small toy airplane and her small minnie and mickey doll.  That way she could show the kids what she would be flying on to get to Disney World and the Mickey and Minnie to show them what she would be seeing there.  She truly thought of this all on her own.  Then I took it one step further and made rice krispie treats shaped like mickey mouse's head with chocolate dipped ears.

This morning Meredith decided to take it one step further and wear her Minnie Mouse dress and Minnie Mouse hat we got from Disney last year.  So as you can see we had a themed snack day/line leader day.  The theme I am sure seemed to be "I'm going to Disney World and you're not"  especially to the other three year olds.  It was not my intention for that.  I was a little worried though, especially since her little friend in the class really wants to go to.

However those were just silly fears, because her teacher sent me a lovely letter home today saying how much the kids loved Meredith's snack and show and tell, and how fun the snack day was.  I think it was a big hit!

Meredith got in the car with a smile beaming from ear to ear saying "all da kids LOVED my snack and dey thought dey was mickey mouse poppa-sickles, but really mom, dey were just krispie treats on a stick!  Isn't dat funny mom!  And mom EVERYBODY loved my hat!  And dey thought I was Minnie Mouse!"

Here she is ready for snack day! 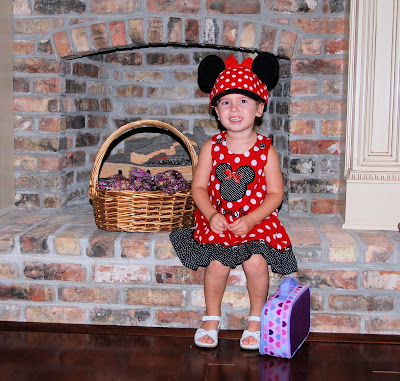 With her basket of snacks, and her show and tell. 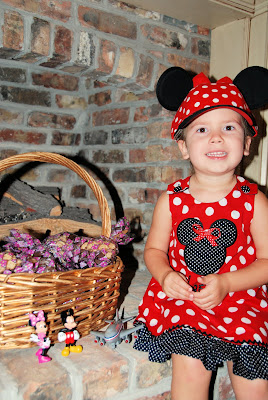 Close up for the show and tell. 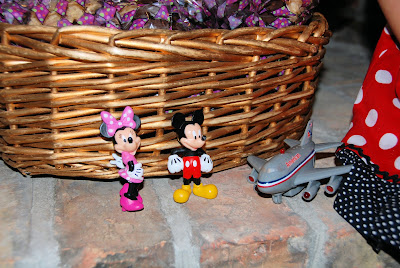 And because he is so handsome and wants to go to school with his sister so bad, here is my man with his show and tell too! 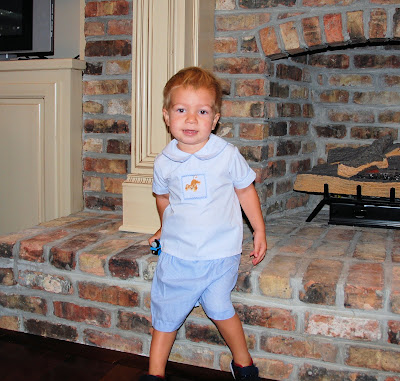 Email ThisBlogThis!Share to TwitterShare to FacebookShare to Pinterest
Labels: all things Meredith, disney, meredith and her pals, school days

Great outfit! Too cute. I hope she had a great time!

I am so jealous of you're Disney trip!!
Noah looks soooo grown up in that pic! (Must be the haircut:)