Meredith, Brownie & No! No! 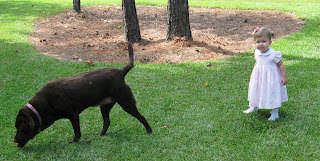 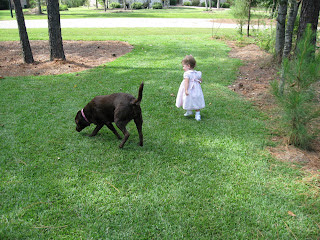 Brownie Jane is our family pet ...a 80+ lb chocolate lab... normally Meredith and Brownie are the best of friends, but last night that was not the case. After dinner Josh and I were sitting in the living room watching tv and Meredith was hanging out eating a frosted pumpkin cookie from her Aunt Barbara. She honestly was savoring every bite, it was the last one. And if Meredith loves anything more than Brownie, her daddy or her mama it is food!
So she took her beloved cookie to the playroom and was in there about 5 minutes singing to her music and playing with some toys, when she ran into the living room whining No! No! shaking her little finger and sticking out her bottom lip! They were the most pitiful No No's I had heard. I wasn't quite sure what was wrong, but Josh noticed immediately that the beloved pumpkin cookie that wasn't quite half way through 5 minutes ago was gone. And so was Brownie. So Meredith came and got her daddy by the finger and led him to the playroom where it became evident that she wanted him to scold Brownie, as she showed him how to do it. So he did and then she did and then he did again and then she did one last time!
That night when it was time to go to bed, it was clear Meredith was still a little upset as she did not give Brownie any good night kisses! I guess that teaches Brownie not to mess with her pumpkin cookies!
Posted by mandi at 7:26 AM

Email ThisBlogThis!Share to TwitterShare to FacebookShare to Pinterest
Labels: all thing Brownie, tales of a toddler

That is the funniest thing ever. I can't wait to come see y'all!