Yes she learned a lot in those two doctor visits. So much that when she got home she grabbed some tools that sort of looked like the doctor used and made Josh and I her patients. She was a lot rougher than the pediatrician and we did not get suckers.

So on Saturday her Daddy bought her, her very first doctor's kit. Now "Mizit is gockga" too! This lovely doctor's kit even came with a pager and cell phone. Look below she is wearing it just like her daddy does. I already want to throw her pager in the toilet with his.

Today when her pager went off for the 100th time this morning it hit her....her daddy might be a "gockga" too!

"Did the hospital call you again sweetheart"

"See you later, have fun at work!"

If only she could bring home a pay check. Oh wait that would be against child labor laws. Oh well. Here is a picture of "gockga Mizzie".....yes we have given her nickname a nickname. 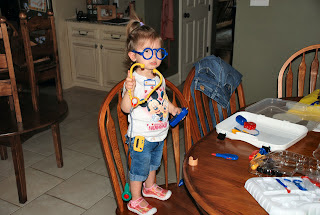 Email ThisBlogThis!Share to TwitterShare to FacebookShare to Pinterest
Labels: all things Meredith, tales of a toddler, two year olds

Oh man! Charlotte needs one of those! Where did he get it??