Thankfully I remembered to grab my camera and take a quick photo of us before we rushed out of the door for mass.  It's normally something I forget to do.  But look how nice we all look, and the kids... in their matching outfits....still relatively clean.  This happens once and a blue moon these days so enjoy it....pictures that is. 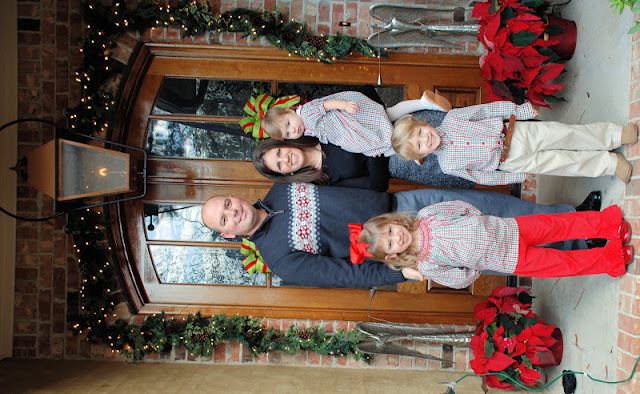 The reason we probably took the picture above is because my picture obsessed loving father-in-law was in town.  And had we not taken those photos before mass....no matter how late we were going to be....he would have flipped.  But seriously I'm happy he was here and that he has a very unhealthy habit of taking photographs or I would not have that gem above.

Luckily he managed to grab a few with the kiddos as well.  I think he is physically restraining Margot from moving right here.  No I'm not kidding....anything for the picture. 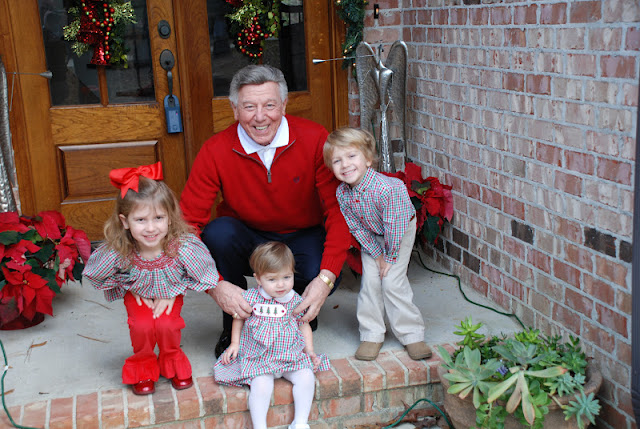 After Mass, we headed home where we took our turn in hosting the annual Christmas Eve party.  I managed to get one picture of the kiddos with their nice clothes on by the tree before all our company arrived. 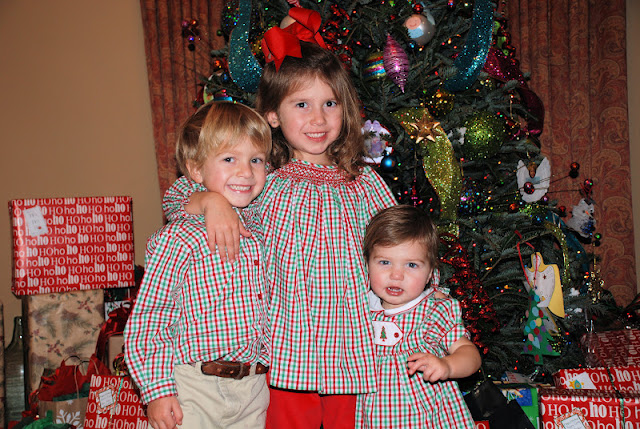 Sadly my father-in-law was upstairs changing clothes or doing God knows what,  and I know he was because if he was around for the tree picture taking session, I'd have a lot more than the one above to show you.  In fact, he may have even got a rope out to tie that youngest tike to the tree for the perfect picture.....and there are some of you out there that think I'm kidding.  I'm so not!

After lots of drinks, food, laughter and almost setting my neighbor's yard on fire, we said good-bye to our company and got into our cozy jammies.  We read our yearly "Twas the Night Before Christmas" and then got settled into our beds, with visions of vomit dancing through someone's head.

That's right, as Santa and his elves were finishing up downstairs we heard a weird noise coming from the littlest tike's room.  I debated on whether to actually go into her room to check on her, I immensely feared waking her up and that resulting in her wanting to come down and play with all the new loot Santa had just dropped off.  It has been known to happen with our sweet, stubborn, little caboose.  Once she is up, she is up. But that mother's instinct kicked in and I went up to check on her.  As soon as I opened her bedroom door, the smell knocked me out.  All of the Christmas goodies she had eaten that night made a nasty re-appearance.  So at 2am we  whisked her off into the bathtub and then into a new set of pajamas with a fresh set of sheets on the bed.  Nothing like early morning Christmas laundry.  Then we amazingly were able to tuck her little butt back in bed.

At this point Santa was exhausted and so was his elf.... and the Momma knew it would be a long Christmas day ahead.  The biggest two tikes were up bright and early and were mesmerized when they woke up to this... 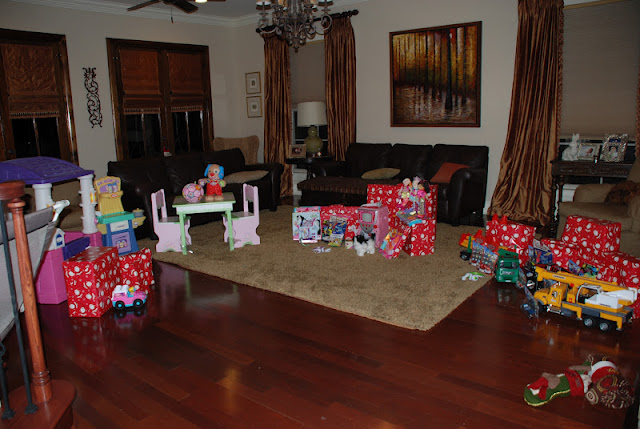 But I made them wait patiently until their baby sister was awake...after about 45 seconds of them complaining about the unfairness of that.  I decided they were right and told Josh to go and wake the little booger up.  I mean I have been woken up by her more than my fair share....what do they say  about payback.  Oh I kid...she did rally though and came down with a smile....well sort of a smile. 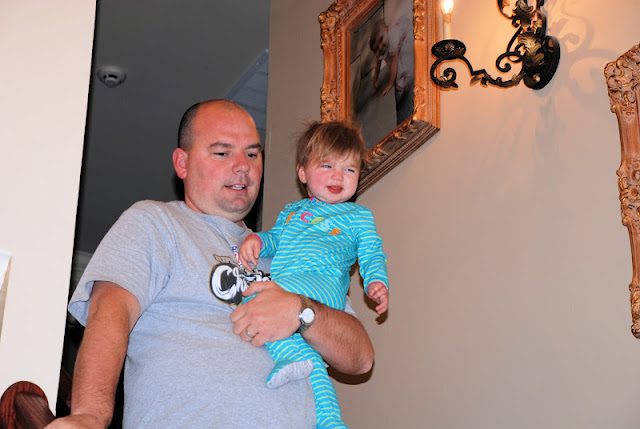 Meredith was thrilled to finally be able to attack her pile.  She went at it in true Meredith fashion. One gift at a time, taking her time and watching to make sure she was going to be the last one left with something wrapped. 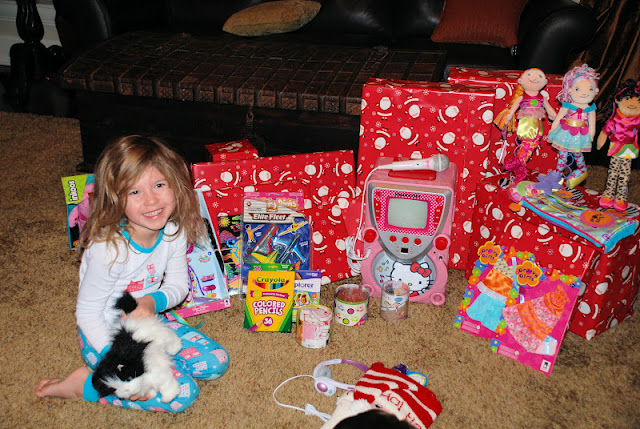 I wasn't quite sure how Noah would attack his pile, but he did just that.  He went at it full speed.  He never turned around or showed us what he got.  He simply unwrapped every wrapped item in the pile to quickly see what it was.  We heard.."WOW....COOL....I LOVE IT.....AWESOME...COOL....LOOK!"  Over and over until it was nothing but a pile of unwrapped toys.  It took approximately 35 seconds. 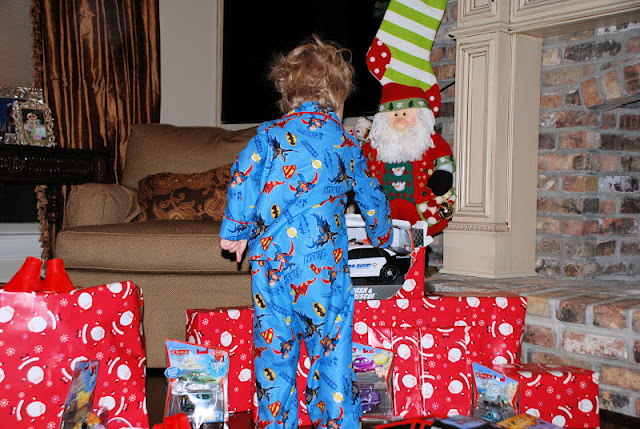 Margot went right after hers as well.   She became increasingly interested in unwrapping gifts this Christmas. In fact a few family members received already opened gifts this year.  I was not wrapping anything twice.  She attacked her few wrapped gifts cautiously and thoroughly.  She ripped tiny piece by tiny piece and didn't stop until the job was complete.   And once it was, she parked her little but in her new house and watched everyone else. 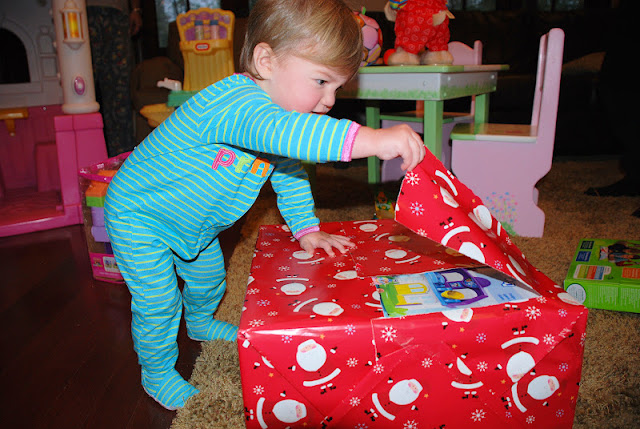 After about a half hour my living room looked like this.  You can see Noah's pile over there of semi wrapped gifts.  The first thing he did was go to the toy room and get some of his old toys to play with his new ones.  Meredith looked at her gifts one by one and decided what she was saving to play with later.  And Margot, well her everything Santa left open and unwrapped she plays with daily, but the ones in the original packaging are still in the original packaging, in her closet.  Mainly because I am the meanest mother ever and have decided that since our house was on the market, we weren't opening unnecessary toys.  They would be easier to move in the original boxes.  It would be like Christmas all over again when we moved.  Now 2 months later, the house still on the market, I guess I should break out those little people.  Seriously, it was only like 3 things...maybe two...Hmmm I wonder where they are.  Poor third child. 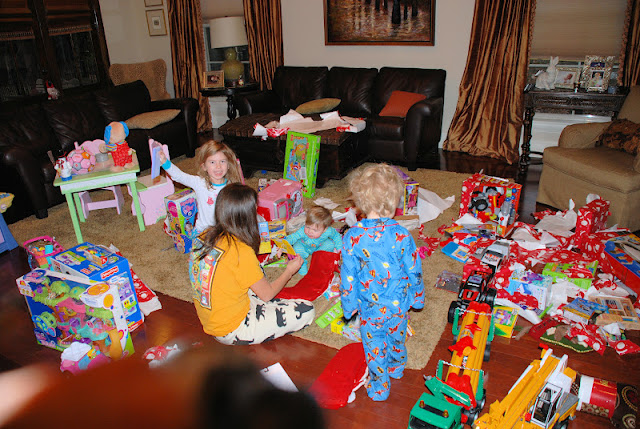 And that my friends was our Christmas.  Margot wound up spreading her Christmas Cheer around to everyone, including me.  Phenegran gel and Zofran became my favorite gift that year.  Tis' the season.  We also sent that special cheer home with Poppy Greg.

**This post was written in February of 2012...the end of February.  I'm backdating it.  I'm trying to get back at it and highlight some of the things I missed.