A very busy weekend with all things Christmas

This weekend was a very busy weekend in deed. When we weren't playing the kids were resting and we were working. We did all things Christmas this weekend. Next weekend we are headed to Memphis to do our Christmas with Poppy Greg so we were running out of time to fit everything in. Here is a recap and a few pictures. Although I didn't have the camera for every holiday inspired activity. We started off Friday, by going to the mall to visit with the Old Kris Kringle himself. Meredith readily walked over and jumped on his lap. She informed him that she wanted a pink kitchen, a big TV, and a big jump jump or trampoline. I am pretty sure that Santa has room for a pink kitchen, but I am not so sure about the rest, maybe in a few years. She also told Santa that Noah wanted a blue kitchen and some trucks. We shall see. Noah was a little more hesitant around Santa. He screamed when I placed him on his lap and then proceeded to stick his arms out for me crying. The photo lady, my mom and I danced around and clapped trying to get him to stop crying and smile. Once he saw us acting like fools he quit crying and began to just pout. He finally put his arms down and gave a little smile, we snapped a quick photo and then I rescued him off of Santa's lap. After the mall visit with Santa we waved goodbye to Mimi and Poppa and headed to Josh's work for his office's Christmas lunch. Meredith loved going to her Daddy's work and Noah enjoyed seeing his daddy during the weekday.

Friday night we headed to get pizza and then to Lewis Lights. Meredith loved it last year, but didn't remember it at all. She kept asking what it was the whole ride there. Finally we arrived and her and I ran ahead where she posed for a picture with the lights. She was so excited. Lewis Lights is a house in the middle of no where that decorates extraordinarily so that families here have some place to view Christmas lights. We decided that we would make it a tradition for our little family of four every year. Something to look forward to.

Here is Meredith very happy to be at Lewis Lights and pose for a picture. 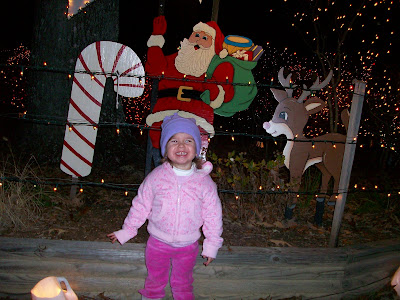 Here is my crew arriving at Lewis Lights, I see that I cut out the word Lewis behind us. 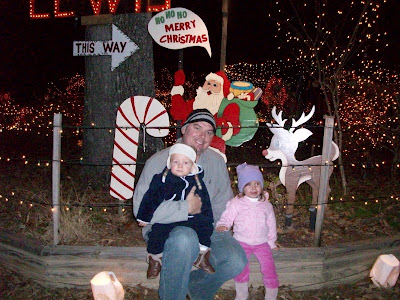 Me and my two butter beans. Notice Noah didn't want to sit on my lap, he wanted to sit on the bench like his big sister....he's getting to be such a big boy! Now if he would just try walking he could run around with his sister. 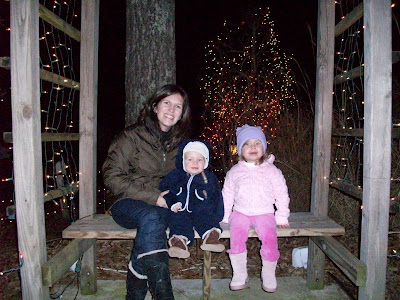 Noah went through the whole thing pointing and saying O0h OoOoOoOoOoh! It was so cute, and something he did entirely on his own. 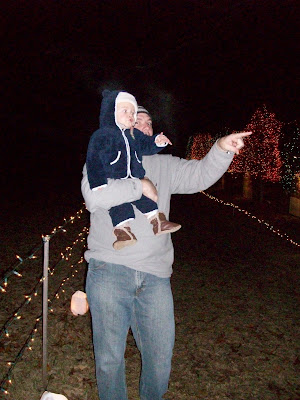 Meredith ran through dancing and singing and posing. She loved it! 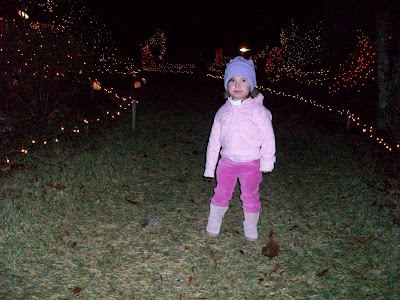 Towards the end Noah wanted to get down and crawl. The ground was way too damp and cold though. Little Noah man if you would try walking you could do it and then you could run after sister on your own! 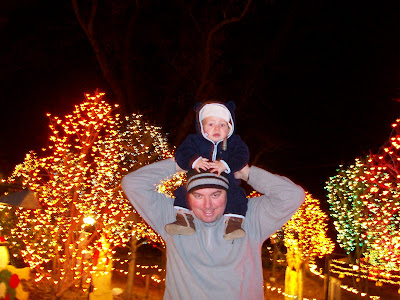 More lights....say Ooh! Meredith ran up to this tree and said "momma take my picture wit da tree!" Then she told me she wasn't a turkey she was a ham.....you are so right my child. 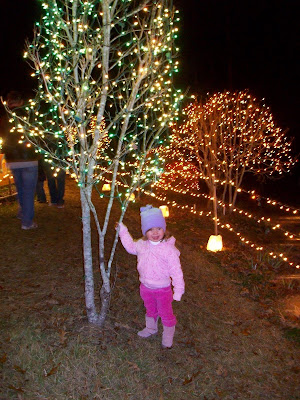 That night we got home later than usual and skipped baths. The kids fell fast asleep they were exhausted from our evening out and busy day. The next morning we awoke bright and early. Meredith and I were having a girl day and going to bake Christmas cookies with Santa. We met Katey and Adalyn there and she was stoked. I kept this a surprise. I have learned it works better than her trying to figure out when we are going since we don't have the concept of time down pat yet.
Here we are, the "big girls" going to bake cookies! We had to wear matching boots today and she is jumping up and down from excitement! 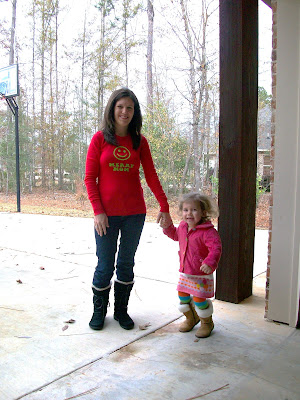 Ready to make the cookies. Meredith was so excited she wouldn't take her eyes off the cookies for a picture. 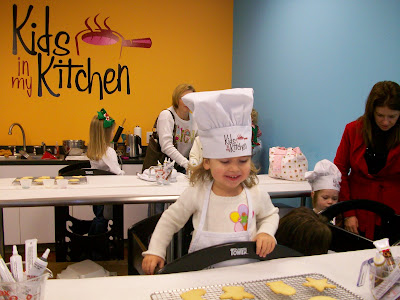 Here is Meredith and Adalyn ready to make cookies with their mommies! 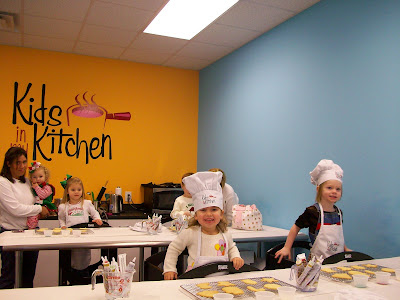 My little chef concentrating on her cookie making. I have to say we both really got into it, it was lots of fun. 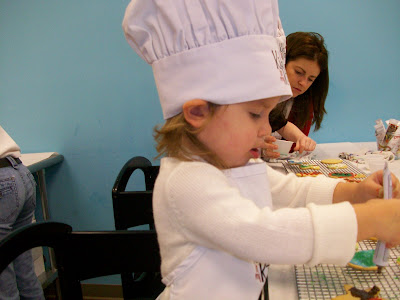 The finished products, we made 8 cookies and then Meredith started eating. The lady told her to pick a 9th cookie to make for her mommy. Meredith picked me out a snowman and then gave it to me to make myself...."here mommy you do it, I'm eating my cookies!" Adalyn did the same thing, she picked one and told Katey to decorate it. I think Katey and I had as much fun as the girls. 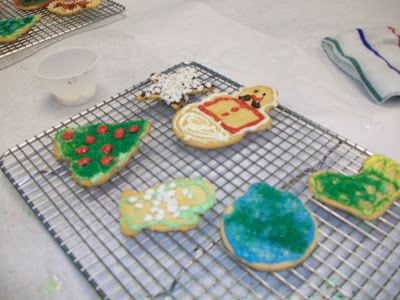 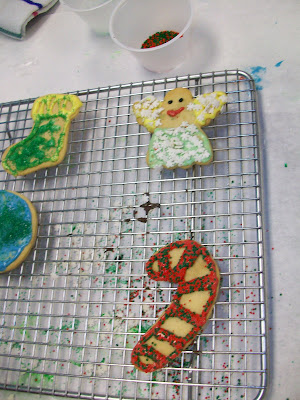 Then Santa came out. My big brave girl was the first to run over and hop on his lap. She was only upset that she had to leave her cookies. She did want one more chance to tell him she wanted a pink kitchen, big TV and big jump jump. 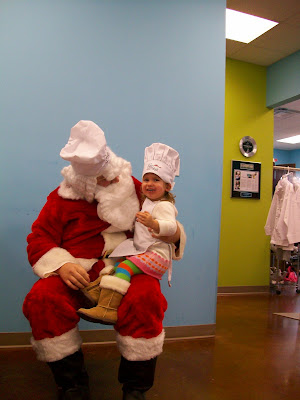 She then got a present from Santa with a balloon and coffee cup. It was a plastic cup that looked like a miniature coffee cup she was thrilled. Inside were really cute colored measuring spoons and cups by kitchen aid. I love them....Awesome. 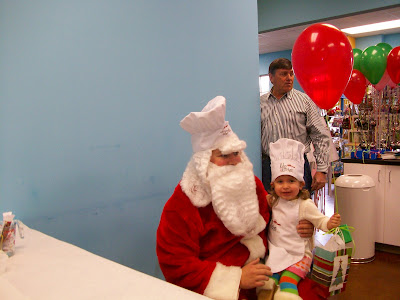 After our cooking class we headed home to make grilled cheese and his the streets. Saturday night we headed downtown to see the Luminaries and ride in a horse drawn open sleigh. It was gorgeous and a lot of fun. Meredith and Noah squealed with delight. We ran into Santa again, this time we were over telling him what we wanted and just sat on his lap for a picture.
Today we are finishing up the weekend by finishing up decorating the house and we all pitched in to make a big pot of gumbo. Mmmm it smells so good! 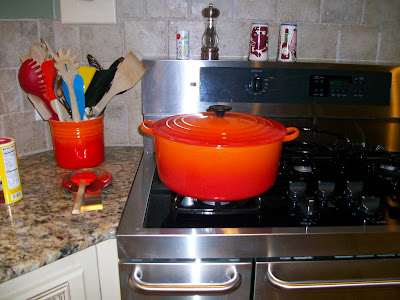