Meredith has been asking for some time to take her training wheels off.  Like months.  I haven't because let's face it, driveway time is my favorite time of the day and with three tikes running and riding all over, I knew chasing after one on a real bike was not ideal for me.  It's really all about me.  Besides Meredith has been riding her balance bike for quite some time and was already AMAZING on two wheels, who needs pedals right???

Tonight though I broke the news to her that her best little friends A and E had taken theirs off and were riding without them now.  So that only set me up to having to take off hers.  And luckily Josh was agreeable and he did.  Five minutes later she was like this....

She kind of took to the whole thing like a fish to water.  I'm pretty sure that strider bike had a lot to do with it.  We love those bikes.  Before I knew it she was going up hill to.  We still need some practice but I'd say she did pretty good for her first 15 minutes without training wheels.  And I'd say my days of the balance bike in the driveway are over, at least for Meredith!  Margot has been eyeing it for some time so she is thrilled!


And this little guy, well he is a whiz on his strider bike too.  Actually he's better on his strider bike than most adults on bikes.  Noah is pro on anything with wheels.  And with the way he's wheeling up and down the hilly streets our neighborhood I think he will soon be without his trianing wheels too.  Luckily for me, he's a cautious little guy!

And not to be left out of the milestone department, tonight Margot learned to double fist freezy pops!  Now that my friends is talent!  So proud of my Giddy!  And seriously how grown up is she looking now!  Not to mention every time her sister got off her big bike, Margot did indeed try and get on.  Every single time. 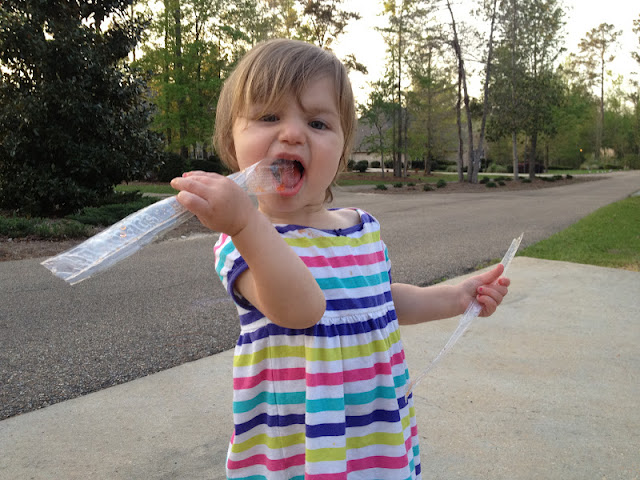 Email ThisBlogThis!Share to TwitterShare to FacebookShare to Pinterest
Labels: all things Margot, all things Meredith, milestones, my little noah, the caboose