This week at school, Meredith, presented her very first "big" school project to her class.  I say "big" school because we have done the yearly "About Me" posterboards before, but this was an actual presentation on one of the 50 states.  Each kindergartner was given a state.  They had to identify it on a map, find and color or make the state flag.  Identify the state bird, tree, flower and a famous person from that state.  They also had to tell about one "fun fact" of that state.

While Meredith thought there were much cooler states than Pennsylvania on the map, she was happy that she had her very own project to do.  And when she realized that Hershey was a city in PA, where they make chocloate, like the famous Hershey bar, the state became much more alluring to her.

Her Daddy helped her research the state on the Internet.  They looked up several pictures and printed them out.  Meredith colored her flag and a few of her pictures and we cut them out together.  She did all the gluing with a little bit of help regarding where to place them on her posterboard.  She identified her capital and drew the star and labeled it accordingly.  She then labeled each item on her poster board.

Here she is immediately after her presentation.  Notice the box of Hershey's next to her posterboard.  At the end she told the kids...."Today I brought each of you a chocolate candy bar from Hershey, PA!"  The kids were amazed.  She impressed them big time.  I guess it would have been more truthful to say, I brought them to you from Sam's who had them shipped in from Hershey, PA, but we won't bother with those technicalities in Kindergarten.

My girl was beaming....and she had every right to be.  She delivered her speech with a loud, clear voice and hit every point dead on.  She did better at 5 years old in a room of her peers, than I would have done at 33 years old in a room full of mine.  Meredith, I could not be more proud of you.  Job VERY WELL done!
(Sorry for the blurry picture, I was excited and happy and wrestling a 22lb octopus with flailing arms while taking it.) 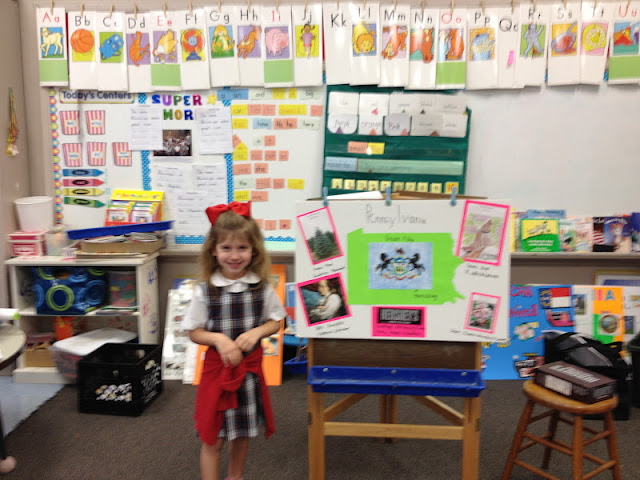 Her poster board.  I will save it forever, along with the video of her presenting it to her class.  When did my girl get so big? 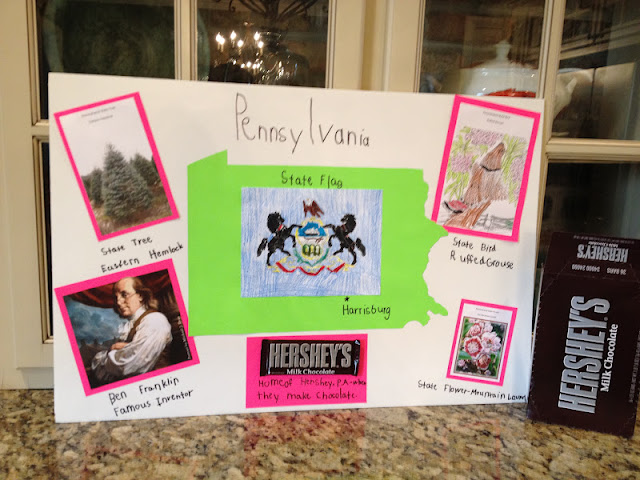