When you are a mother, sometimes you eat your words

One of the few things I have learned about motherhood is to never say never when it comes to your children. If you do....you WILL inevitably eat your words. I don't make statements like... "my children will never....", "I will never do ..... for my children", or any other sentence with the words children and never anymore. Yes I have eaten my words....probably more than once, but last night I ate them big time!

When I was pregnant with Meredith we didn't think we were going to find out the sex so I did a really generic nursery (yellows and greens). I know not very creative or chic like this one, but cute. I also did that nursery on a budget, a resident's budget if you will. My mom bought the crib, the changing table was $25 from a baby store that was on clearance and the dresser was a built in so all Josh and I did was buy the bedding, the rug and the chair. I know, we did spend some money, but no where near what I did with Noah's nursery and Meredith's big girl room. 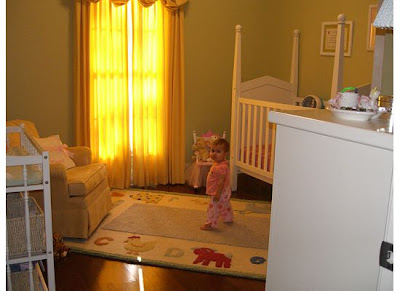 When my baby turned 17 months she moved into her big girl bed. She has always loved it, never gotten out of it, still doesn't get out of it and I would say transitioned beautifully from day one. So when we bought her "big girl" furniture I went all out and went all out for her bedding too. I had custom bedding, drapes, a shower curtain and window seat made. I spent a small fortune....now I realize this was not the wisest thing to do. However I chose a pattern that wasn't too babyish and could grow with her. That way I wouldn't have to change it again until she was like 10. I am laughing at myself as I type this. 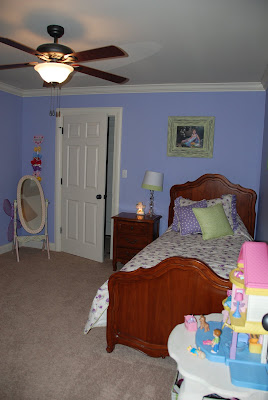 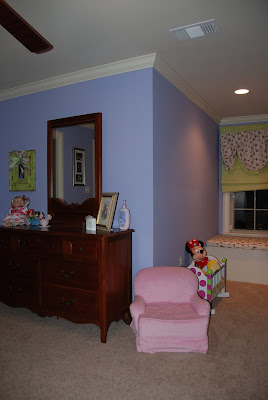 Yes I even did the bathroom to match....a glutton for punishment. 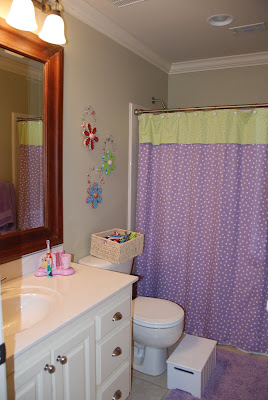 When we discussed the possibility of moving I told Meredith if we moved she could have a pink room. Did I mention my child loves pink? Well she didn't quite get that we aren't moving and so the room stays purple idea. All she heard was PINK ROOM GET! So I told her for her birthday I would make her room pink and make it a princess room. This really made her happy. She has been talking about it for weeks. "Mommy I'm getting a pink princess room?"

Like all 3 year olds she has been brainwashed by Disney and now lives, breathes and eats all things pink, princesses and sparkly. It really is overkill. I extremely dislike Disney. UGH. So when I said Meredith could have a pink princess room I was thinking of this....of course the walls would be pink instead of green, but you get the idea..... 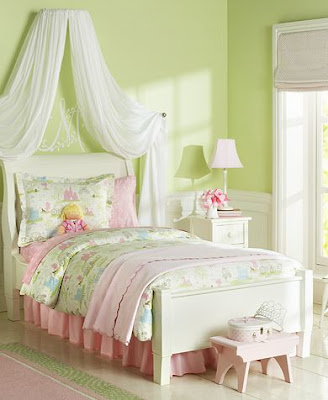 Because no way was my child getting a cartoonish type of bed spread with Disney princesses. I hate those. Don't get me wrong they work fine if you like them, but me.... I have a strange aversion to them and that is where eating my words came in. When I was picking out the fabric for her big girl bedding and she was too little to have an opinion I said...."My child will NEVER have a Disney princess bed spread." Yep, that is what I pretty much said, and for Noah you can insert....batman....spiderman....cars...etc. I don't mind the cute things with cars/trucks on them or fairies/crowns, but the cartoonish ones with the actual characters just make me want to break out in hives.

So yesterday I took my two tikes to Target to get a $16 dry erase calendar. I decided to browse the kids bedding to see if they sold canopies to put in the princess room I dreamed of. We started off by the bathroom stuff and ran into the princess shower curtain, towels, rugs, toothbrush holder and all the other over priced crap. My daughter went nuts.
"OH MY GOSH MOMMA.....LOOK AT DA PRINCESSES! It's for my room?!?!?"
And with that she started shoving it in the basket. So I obliged. I hadn't originally planned on redoing her custom bathroom, but what the hell. I had sold a lot of stationery this month and it was for her birthday.

Then we headed to the bedding aisle to see about the canopy and she saw this..... 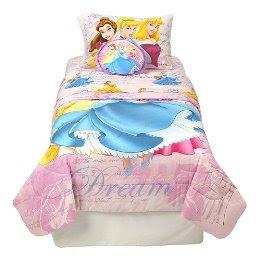 Holy mother of God, she had just hit the princess jackpot. I have never seen a 2 year old so happy. Her whole little body lit up and started shaking with excitement and that was it. She was on a princess high that even I couldn't bring down when I refused to let her put it in the basket. She grabbed the twin comforter and cradled it to her body while shrieking in delight and started heading to the check out line. I priced it $32.99. Much cheaper than the pottery barn one I had my heart set on, but this was the one she loved. I thought about letting her getting for .02 seconds and then I told her no. I grabbed the matching sheet set off the shelf and told her she could get that instead. She didn't get discouraged or upset, she simply told me....."No momma, I get dis one for my pink room and my pink bed. I get dis one. I LOVE dis one."
I knew I was now competing with the damn princesses. Damn Aurora in all her pink glory....go ahead and brainwash my kid into thinking she needs all this pink stuff.....her room is a beautiful shade of purple....Why hasn't Disney made a purple princess yet?
So I told her..."Meredith we aren't getting that, it is ugly. Momma picked out a different princess one for you. We will get the sheets and paint your room pink and get the stuff for your bathroom, but we are putting that back." Her heart literally broke right there on the aisle in Target. And I thought to myself, let the girl get what she wants this is her room not yours. And so I did. I ate my words. My daughter has a princess bed. And I am okay with it. Although I am still in love with this one from pottery barn. 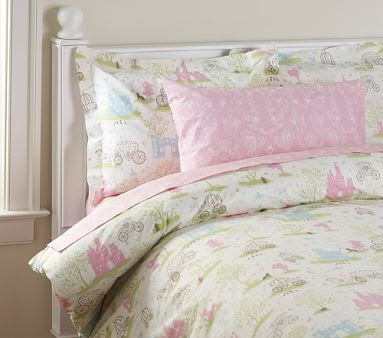 When we got home from school today her room was all finished. The first thing she did was run up the stairs to see it. She was in awe. It was the most beautiful things she had truly ever laid eyes on in her mind. She looked at me and said...."See momma, it's not ugly....it's beautiful!"
I have learned not to call anything she loves ugly ever again. And now her room and bathroom look like this. In two weeks, I will paint he damn room pink and I will lay in bed every night wanting to order that damn pottery barn bedding, but I won't. This is her dream room, not mine. 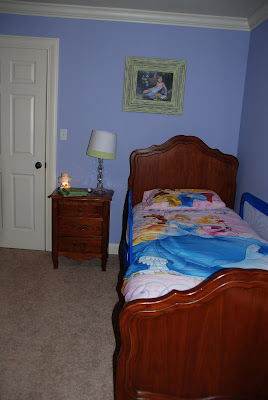 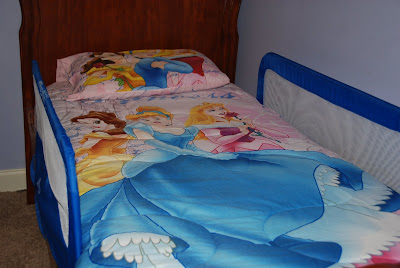 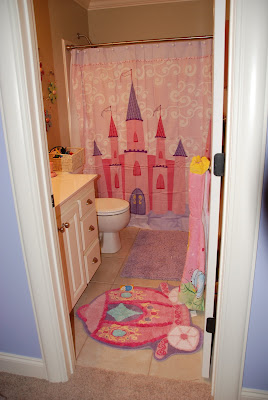 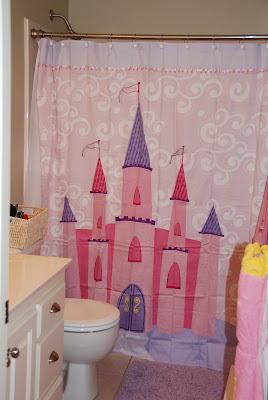 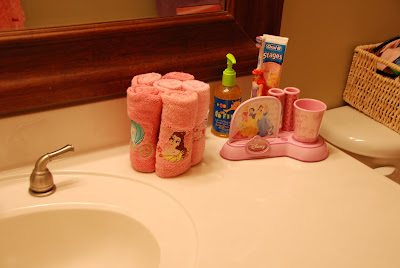 The bathroom stuff isn't too bad and just think although she might not remember you did this she would remember if you didn't. Probably for the rest of your life.

The shower curtain is kinda cute but I have to say that I feel the same dang way about the cartoony character stuff. I actually want to buy that same one from PBK for Maddie's bday. But at least she has the one she truly wants! Your a sweet mommy!
~~Amanda Peel

I know what you mean, I have steered clear of Star WArs, Cars, Thomas the Train, and Batman. But if one of them happens to see it, I am sure I would cave too!! In fact, I know I would. Actually it looks good. I really like that shower curtain. I think it looks great, and look how happy you made her. I would have loved it myself at her age. what girl wouldn't!! Plus you did not spend a whole lot on it.

Grace gasped and said, "But I want to buy that! Can I sleep in it with Meredith??" Too bad when I said I was buying something not too baby to grow with her, I meant it! You're a sweet mommy!

That is too funny! The bathroom looks cute.
And I think Jasmine is sometimes in purple, but mainly in blue.
I am with you...purple rules.
Tinker Bell has taken over our house at the moment. She isn't into the princesses.....yet.

Too funny! Look on the bright side. You saved a small fortune and made her day. ; )

I didn't know you had decided not to sell. I was going to ask how it was going.

Thanks guys! I'm still not digging it and still seriously considering going my route. I laid in bed tonight with her and told her it was so itchy and not comfy, to which she told me to scratch and it was VERY COMFY!

OH MY GOD MANDI....You poor thing! I totally share your disgust for all things disney when it comes to decorating a room!
I don't know if I could have let her have it (I hope I could have)...you are such a great mom!

P.S. I LOVE that pottery barn bedding you found:(

The bathroom is cute but yeah, those princesses are HUGE on that bed! haha. Well, just think...you can change it all up when you move and I bet she will be bored with the old stuff by then. :) The garish princess bedding can always be a rotation of sorts. At least she is happy about it! That's all that matters, anyway.