Sometime back in April, I wrote a big fat check for a kitchen renovation. A renovation that would take 2-3 weeks. Remember that post of excitement the day the brick arrived. Yes, it seems like just ages ago. Well now I feel like I've been through the ringer.

First it has taken nearly 2 1/2 months, which is a whole lot longer that three weeks. Then as they came to install the island, I noticed that it was a lot smaller than what we originally discussed. I refused to let them install it, since it wasn't what I originally discussed and agreed to pay for.

So my contractor comes out and we agree to disagree and then he chalks it up to a miscommunication. However no matter what he says, we miscommunicated I know damn well I didn't miscommunicate this...... 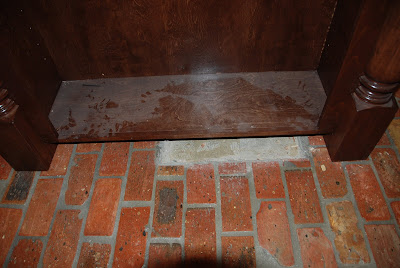 In no way, shape or form would I have "miscommunicated" to replace my island with a new island that was a good 6 inches to short on each side. Nope, I am going to go ahead and say the contractor screwed up royally. However what I was saying earlier was not screwed up, but use your imagination and insert whatever word you think I would have used! And to prove it wasn't just on one side.... 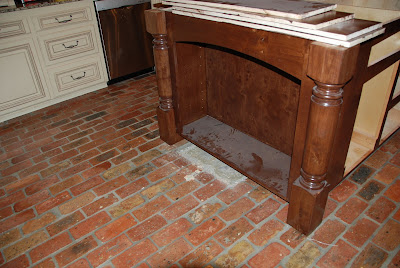 This my friends is why I have resorted to drinking heavily in the evenings! Today I get to deal with the geniuses again, think of me, pray for my sanity.

I am thinking by the time Meredith starts kindergarten next year it may be ready. What do you think?

That sucks. You are making me not want to add on.

Echoing the previous comment, That sucks! Years ago we hired a contractor that came highly recommended to vault the ceiling in our master bedroom. The quote we received said it would take about a week. Well, day 1 = demolition. Day 2 = 1st day of renovation. I came home on my lunch hour to see the start of my new vaulted ceiling to discover they had simply re-sheetrocked the same flat ceiling. The contractor said there was some sort of "miscommunication" in what I wanted them to do. Hello? Miscommunication? Why would I hire you to tear out a perfectly fine ceiling only to replace it with the exact same thing? Yeah, I just like wasting money! So sorry you're now living a similar nightmare.

I'm still trying to figure out where that shoe kick molding was going to go???

Mandi!
In the past week I have moved out of my house, signed it over to new owners, and moved in with my in laws. I drink heavily nightly as well. If you ever want to chat and compare "horror" stories you know where to find me;)