The memories I want to last forever

Tonight my little man made a very big milestone....no not potty training....we did that a few weeks ago.  No tonight marks his second night of going to bed WITHOUT his pacifier.  The pacifier I dreaded taking away for a few reasons....

1. I am pretty sure he was more addicted to it, than his sister was, if that is possible.
2. My hands are pretty full and this was one more thing I was putting off.
3. There was no Disney world trip planned to try and bribe him with.

However Mimi and Poppa came to the rescue with number 3....no we aren't going to see Mickey Mouse....but they did promise to by my boy a "shewiff car" that he had been eyeing in the toy store for his birthday IF he got rid of the paci.  And I was not sure who was more excited....Noah or Mimi.  Noah was pretty stoked someone agreed to get him a "shewiff car" even though he already has a gator.  And Mimi is always excited when she gets to spoil her grandchildren...which she does quite well. 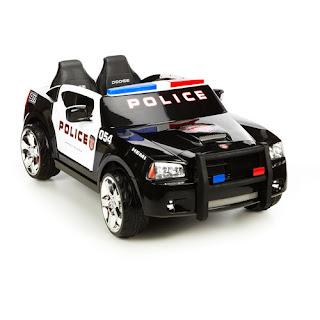 So yesterday, Mimi kept all 3 tikes while I went to a meeting.  When I got home they showed me a bag of pacifiers.  A bag that Noah had willingly collected and put his pacifiers in.  He then gave them to Mimi to take home.  Later on that day he found one....under his bed...he put it in his mouth....and when I found him he told me that Mimi forgot one....then he asked me to hide it with him under his covers so Mimi and his Daddy couldn't find it.  I guess he knows who lets him slide in the family....me.

I laughed and then I took his paci and said he could only have it at night time OR I could call Mimi and give it to her so he could get his sheriff car.  He told me to give it to Mimi and so I took it downstairs and hid it.

At 7am the next morning, Noah was ready to call Mimi and report his news.  And as promised Mimi and Poppa picked him up from school today and took him to get his sheriff car.  He then stayed at Mimi's that afternoon to work on it with Poppa.  When I picked him up around 3, the sheriff car was finally finished, however it needed to charge for 24 hours before it could be driven.  Explain that to an almost three year old without any tears.  He was genuinely heartbroken as was his Poppa seeing this.  Poppa promised that as soon as the sheriff was full of gas he would bring him over the next day.  And with that promise we finally got him into the car to head home.

Tonight Noah went to bed at his usual time again without a paci.  However he got up three times to use the bathroom.  Finally after asking a fourth time to go potty in an hour, Josh told him no and the tears started flowing as well as the "I want my paci" cries.  My heart broke a little, but I knew better to give in.  He did it the night before and now he was the proud new owner of a sheriff.

I finally asked him if he wanted me to tell Poppa to bring his sheriff back to the lady at the toy store and I would go get him a paci and he shook his head no while sobbing "no I a big boy."

Right now my two favorite guys are upstairs sound asleep side by side and neither one of them has a paci.  These are the memories I don't want to forget and the stories I want to one day tell Noah.  How much everyone loved him and wanted to celebrate this accomplishment.  How very proud of him we were at what may one day seem as very small accomplishment....because today, right now....this is huge.
Posted by mandi at 10:48 PM

Email ThisBlogThis!Share to TwitterShare to FacebookShare to Pinterest
Labels: milestones, my little noah, spoiled by Mimi